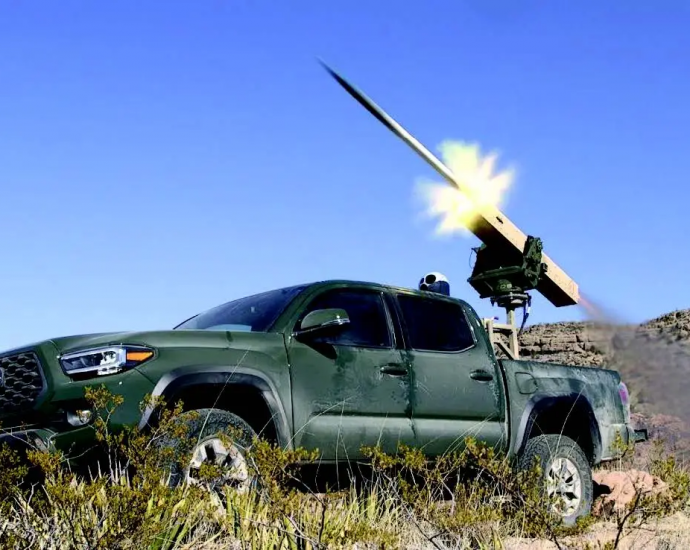 The VAMPIRE kit from American weapons maker L3Harris is included in the $3 billion US aid package to Ukraine that the Biden administration announced Wednesday (08/26/2022). The package, the largest to date, also includes artillery and air defense support, among other systems.

According to the manufacturer, the Vehicle-Agnostic Modular Palletized ISR Rocket Equipment (VAMPIRE) kit includes a “suitcase-type,” laser-guided weapons system that can be easily loaded into the cargo bed of a truck and set up by a two-person crew. The weapon is effective for striking both ground and airborne targets.

In Ukraine, the system is likely to serve as a counter to unmanned aerial systems, Defense News reported Thursday, citing remarks made at a press briefing by Colin Kahl, undersecretary of defense for policy.

The US has been providing Stinger missiles that can be fired by a single person on the ground; supply has been running short.

The VAMPIRE system is a four-barrel rocket launcher which allows Ukrainian forces to strike multiple targets without reloading.

The ability to mount the weapon on a vehicle gives operators the ability to cover a larger area faster than troops on the ground with shoulder-launched missiles.

Russia has made extensive use of drones since invading its neighbor in February (2022), using them for surveillance missions that enable later artillery attacks on Ukrainian forces. Ukraine previously alleged that recovered Russian UAVs, including the Orlan-10 surveillance drone, have included technology from Western countries, despite global sanctions.